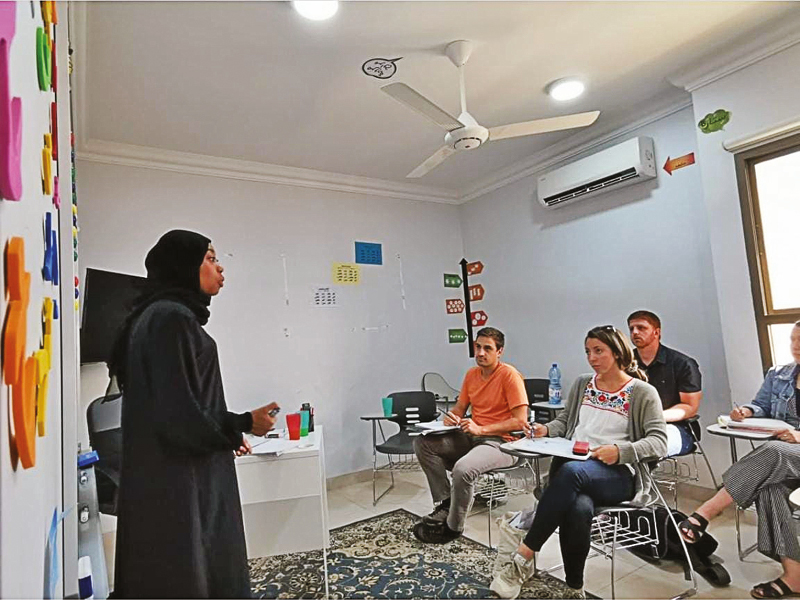 Arabic lessons resume in the sultanate

Muscat – To celebrate World Arabic Language Day, which falls on December 18, Muscat Daily caught up with an Omani national who has set up an institute to teach the Arabic language to non-native speakers.

Nasser al Jabri, founder of the Arabia Experience Institute, said, “We teach Arabic and Gulf dialect to non-native speakers at the Arabia Experience Institute. We welcome anyone interested in learning the Arabic language, customs, traditions and culture of the Gulf. We pride ourselves on our excellence in teaching the Omani dialect, customs and traditions, and we have many programs. Many foreigners came to the sultanate to learn Arabic.

“We opened the institute on November 18, 2015. I was inspired by His late Majesty Sultan Qaboos bin Said who cared a lot about the Arabic language, supported and encouraged us to master and speak it. I am his example.

“At the institute, the Omani dialect is also taught individually and in groups. Our students also have the opportunity to experience the language and culture outside of school. We offer accommodation with Omani families and while learning the language, students can also enjoy Arabic and Omani cuisine during their stay at home.

“In the beginning, I had to face many challenges when establishing the institution and I overcame them gradually. But I still struggle to attract students to live with Omani families.

Anetta Szabo, one of the foreign students studying at the institute, said: “A language is like a mountain, which you cannot move in a day. But you can move it slowly, day by day with a spoon. When I started studying Arabic at the Arabia Experience Institute, I said to myself: even if it takes ten years, in ten years, looking back, I won’t regret having started it. I will say it was worth it.

Anetta added: “Arabic is a Semitic language. It is very different from other languages, it seems to have evolved from Indo-European languages ​​- English, French…etc. So at first it’s very difficult because it’s so different from the languages ​​that most Europeans study in school but later you realize that the spoken language Arabic has very few grammatical rules and this is not that difficult if you study at the Arabia Experience Institute in Oman.

“Learning a language takes courage because you regularly put yourself in uncomfortable situations. You have to practice what little you know and use the broken language you have. But with continued practice, you can go a long way. It’s hard work and courage but it’s a good investment; it opens doors for you in the professional world and makes you feel more at ease in another country. My Omani friends have always been helpful. They gave me the chance to learn it.

Muscat – The Ministry of Education (MoE) on Tuesday launched the Al Farahidi Prize for Arabic Language at an event held to celebrate the International Day of Arabic Language, which falls on December 18 under the slogan “Arabic Language and civilizational communication”.

The Al Farahidi Prize was launched with the aim of developing students’ skills in reading, writing, literary creativity and conversation in Arabic. It targets students in grades 1 through 12.

2021-12-21
Previous Post: 4 things you should know about the Arabic language
Next Post: Netflix to release first original Arabic-language film next month