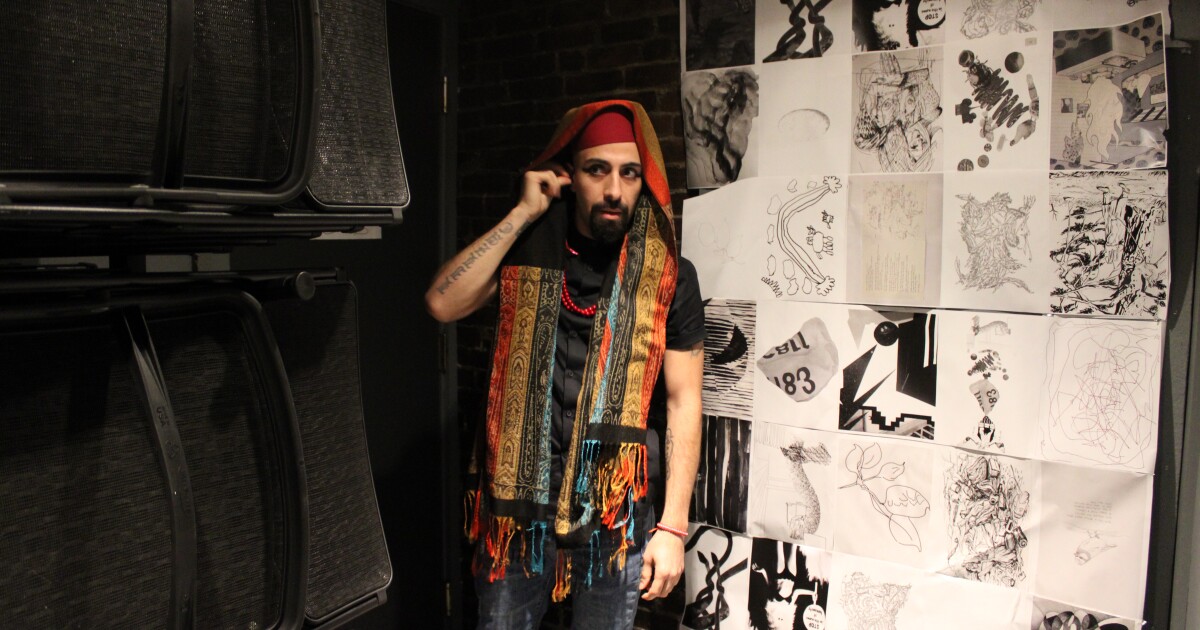 What do Maine and Syria have in common? Neither is a particularly easy place to launch a career in hip hop. But that’s exactly what a Syrian-born rapper did, on a winding journey that began through the streets of Aleppo and led, last week, to an album release gig in Portland.

In the green room of SPACE, an art room in downtown Portland, Assasi stood quietly next to a mirror, eyes half-closed, while his wife and manager Stephanie Crosby applied makeup before the show.

Assasi is from Aleppo, Syria, and only asked to be identified by his stage name due to the risks associated with speaking out on political issues in his home country.

It was in Aleppo that Assasi first discovered American rap music as a child, and says he quickly began writing his own lyrics about bullying, toxic masculinity and other issues he faced as a child.

â€œI didn’t have a very easy childhood,â€ Assasi said. “I wasn’t taken seriously about anything I wanted to do. So hip hop was the only alternative to write something and express myself.”

As a teenager, Assasi said he was in contact with a few other Syrian rappers and was even able to make money playing. But he saw no future for his musical career in the country, and by 2011 the political situation had rapidly deteriorated.

On stage in Portland, Assasi told a story from some of his last days in Syria: sitting on the balcony with his brother, watching what they believed to be shooting stars across the night sky.

“And then after five seconds we hear the sound of explosions,” he said. “And I’m like, oh, these aren’t shooting stars. It’s something else. We were seeing the bombing from one side of Aleppo to the other.”

The memory is captured in Sawareekh, which he says translates to â€œrocketsâ€ and is one of five tracks from his new album, Third World Wide Volume 1.

Around the time the rockets began to fly over Aleppo, Assasi left Syria, for what would become a multi-year journey across several continents.

He first traveled to neighboring Lebanon, where he found a job at a restaurant in Beirut, sleeping on the sidewalks for the first month until he received his first salary.

There, he meets his future wife StÃ©phanie Crosby, originally from Millinocket, who was teaching near Beirut. When Crosby got a job in India, Assasi followed, but first had to travel to Nepal and wait for a visa.

Then Crosby returned to the United States and applied for a spouse visa on his behalf. Assasi returned to Nepal and then to South East Asia, where he worked on music projects with Finnish rappers in Malaysia.

Finally, in 2017, Assasi was able to travel to the United States, where he met up with Crosby in Millinocket.

â€œIt was total culture shock,â€ Assasi said of his arrival in northern Maine. “Where are the people? There is no one here.”

The couple lived in Bangor for a few years, then moved to Biddeford. Even as he moved from country to country, Assasi continued to assemble his next project – a three-volume record that would combine old-fashioned American rap rhythms with Middle Eastern melodies played on instruments such as the sitar and the darbuka, a traditional Egyptian drum.

“Culture in [the] The Middle East is rich, “he said.” We have a lot of amazing traditional music. ”

On stage, Assasi makes a distinctive figure. Her head is completely shaved except for a tightly woven red braid down the center. He wears a red fez and drapes a multicolored scarf over his head. He says his wardrobe choices, along with raping in his native Arabic, help him cope with homesickness and the sense of cultural isolation that comes from living so far from his native country.

“Play here and make music, and be who I am and [wear] the fez, like it’s a little better, â€he said. â€œIt helps me feel good, so I actually represent where I’m from.

In the new track Yalalalli, Assasi confronts this feeling of being suspended between the United States and the Middle East, and not feeling fully at home in one place or the other. It’s a heavy subject, and yet, he says, the song is decidedly festive.

â€œI’m like yeah I don’t care, it’s still not good but I’m just going to celebrate and be happy and make music,â€ Assasi said.

â€œThey forget,â€ he recalls in one line of the song, â€œthat I am going through the homeless worldâ€.